“We found what we were looking for …”

The Scots settled in Stuart Town (near present day Port Royal) in 1683. The town never really prospered, possibly due to malaria and in August 1686 it was attacked by Spanish forces and their Indian allies who said the town contained less than ten men. Later reports said it was sickly and that only 25 men were there to oppose the Spanish ambush. The attack helped date the letter written from Charles Towne by Jean Boyd who arrived in Carolina in late Mar 1686. In his letter, he wrote, “Here we are about 200 French people at least. Most of these plan to go to take up new land between the Scots who are at Port Royal & the river you see marked ‘Colleton.’ The new French [who are] coming will settle on Ashepoo…& on Combahee. The mouth of this river is beautiful & deep, with good land, good water & finally good Indians & is a place separated from the English, who naturally do not like us.”

We now know there was another Spanish attack on Stuart Town in December of the same year and that the Boyds and other French settlers decided to settle to the north on Charles Towne on the Santee River. A letter written “From our plantation on Santee in Carolina this 18 May 1688,” outlines their discovery in early 1687 of “a proper place not only for those French people already in the country who were not yet established, but also for those who could come and join us. We found what we were looking for, a place elevated upon a beautiful river, with a beautiful vista, fresh air, good waters, and the finest land in Carolina.” They made a second trip by foot, sleeping in the woods in February and returned in late March to cut trees for their town. “A sail from a boat was our first house and the earth our bed. A cabin like that of the savages, reasonably made out of a plant common in the area and very clean (which we call palmettes) was our second house…for five months…Finally, we built a little wooden house.” 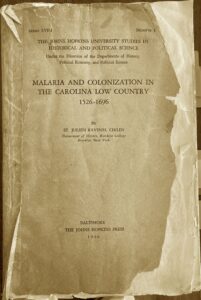 A portion of the above information comes from this book by St. Julien Ravenel Childs, recently donated to our collection—along with several other interesting and uncommon volumes—by Susan Videau Baldwin Bates, historian and independent scholar and co-author of French Santee, A Huguenot Settlement in Colonial South Carolina. The books, some from her collection and some from her mother, Agnes Leland Baldwin’s are being accessioned and will be in the Society library. They include several hard-to-find editions such as Child’s Malaria and Colonization (1940), Vols. I & II of Collections of the South Carolina Historical Society (1857, 185), Salley’s Narratives of Early Carolina 1650-1708 (1911), Baldwin’s notebook of Letters from Carolina, Records from the British Public Records Office Pertaining to Carolina, Klingberg’s Carolina Chronicle The Papers of Commissary Gideon Johnston 1707-1716 (1946), McDowell’s Journals of the Commissioners of the Indian Trade 1710-1718 (1955) and Lee’s The Huguenot Settlements in Ireland (1936). We want to set up a lending library and will be discussing the means of doing so when we can. In the meantime, we will post a series of blogs from these new additions to the library and we encourage researchers to contact us via e-mail with research questions.